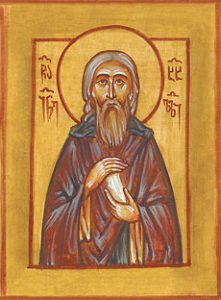 In the second half of the 10th century King Davit Kuropalates founded Khakhuli Monastery in the historical region of Tao, at the gorge of the Khakhuli River, where it joins the Tortumi River.Once famed for its holiness and academic activity, today Khakhuli Monastery is a Turkish possession and has become a tourist site. Nevertheless, the Georgian nation continues to be illumined by its grace and the radiance of the Georgian faithful who labored there.

A contemporary of King Bagrat III (975–1014), St. Ioane of Khakhuli was a highly educated theologian, translator, and calligrapher. He has been called “Chrysostom” since he, like the beloved archbishop of Constantinople, delivered his sermons with extraordinary eloquence.

Some sources claim that St. Ioane was first consecrated bishop of Bolnisi and later transferred to the Khakhuli diocese. It is generally agreed, however, that he left Khakhuli around the year 1019 and traveled to Mt. Athos with Arsen of Ninotsminda and Ioane Grdzelisdze. One Georgian manuscript, however, suggests that St. Ioane was not a bishop at that time, and this has baffled Church historians to this day. In this manuscript it is written: “Pray for the blessed monk Ioane Grdzelisdze and his spiritual son Ioane Chrysostom, who labored to write this holy book.”

The countless good works he performed from the bishop’s throne, the title “Chrysostom,” and the many important writings accredited to him attest to the piety, wisdom, and patriotism of St. Ioane of Khakhuli.

It is written in The Life of Giorgi of the Holy Mountain that St. Ioane reposed on Mt. Athos.

Through thy works, labors, prayers, and fasting thou hast found rest in the majestic and heavenly kingdom, O Holy Father Ioane. We beseech thee to intercede with Christ our God, that He have mercy on our souls!